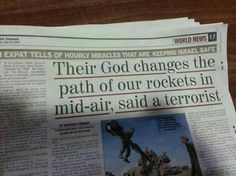 Sibling rivalry.  Nonsensical and yet so commonplace.  It was present in the first two brothers in all creation, Cain and Abel.  It is present now, played out on the world stage in the Middle East.  Envy was at the root then and it is now.  As a parent, I seek to stamp it out, but it is hard to convince our flesh that it is ok when one is seemingly blessed more than another.  Man shakes his fist accusingly at God when he thinks that he has been unfairly treated, and yet what does it mean for us to be fairly treated?  Why would any of us ever deserve favor from God?  But I digress.

Each day as I open God’s word, I see evidences of God’s favor and the resulting envy on the part of those not a part of His promise.  I see it on the evening news.  People perceiving that they are owed something.  People blaming another people group pretty much for existing.  What is difficult for man to accept is that God chose a people – His people – to be the apple of His eye.  It is His prerogative to choose – He is the Creator, after all. He chose to grant Abraham and Sarah a son, Isaac.  They took matters into their own hands and had Ishmael.  But God was not going to bless the action done outside of His will.  He knew from the beginning what His plan was and His plans have never gone unfulfilled.

The amazing thing these other people groups neglect to see is that all people groups can be a part of the promise.  It was through Israel that all nations would be blessed.  I am a part of the promise, though I am not Jewish.  Grafted in, adopted as one of His own – I will never understand why such undeserved mercy was granted to me.  While the favor God granted to the Israelites might appear unfair – we all want to be chosen as the captain of the team – God knew Abraham’s heart – He is omniscient and His purposes are so far above ours.

The spirit behind the envy is the same spirit as the ancient enemy of our souls – he was jealous of God’s place and wanted to be like the Most High.  So the enemies of God’s people foolishly think they can take the place of God’s chosen.  Their plot is evil and will end up with the same result as the devil – forever cursed to hell.  May God open their eyes to see that the One they are persecuting is God Himself.

Lord, help us to shine Your light and love to all peoples.  Anyone Who calls on the Name of the Lord may be saved.  The days are evil, but You are still calling people to Yourself.  Please use even this evil circumstance to draw even more to Yourself.  You are good, God, all the time!

One thought on “Children of the Promise”